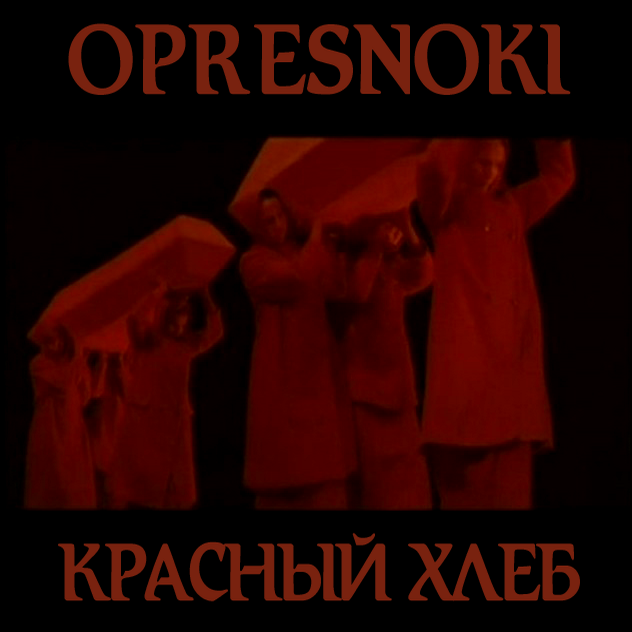 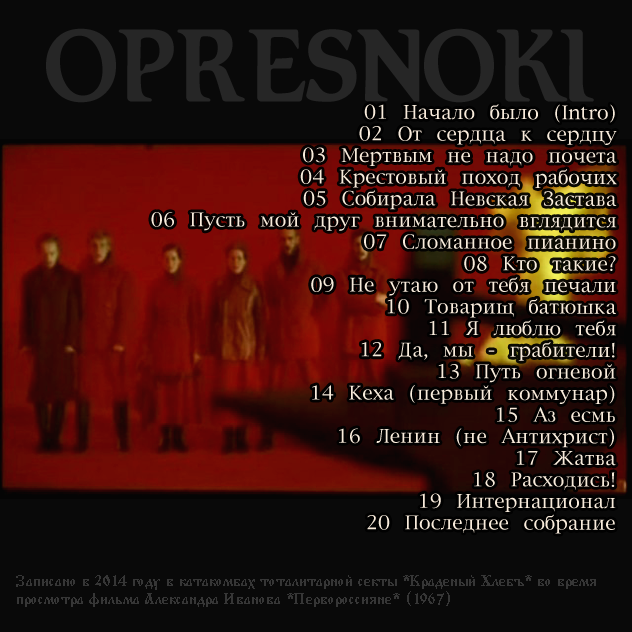 
EP-2013 was devoted to the patriarch "kradenohlebstva" - Reverend Father Ilinova on "demo" voices of the brothers who are waiting for the coming of the Monk. "Suitable whether Mr. Ilyin?" - Will suit you? Do not oversleep?
Of course, after all of these stories, the listener waiting for full-fledged work of the staff know in what style, but do not go on about even the most loyal fans - this is the credo of the team, as well as the most "kradenohlebstva."
"Red bread" - a return to the Red Truth, meditation on the works of Platonov and lighting of the flame in the hard and primitive heritage of the peasant poet Pimen Karpov. OPRESNOKI offer the listener to feel the atmosphere "underground man", at a time when the assassination of the country's top officials were acquitted Gnostic struggle between spirit and matter, when suicide Zasulitch justification was possible, and the sky was a little closer. Savinkova experiments, groups of "hell", "Narodnaya Volya", gesture Grigory Goldenberg - all these God-fighting events from the history of Russia and dedicated music album OPRESNOKI 2014. "Red Bread." Basis and "red thread" of all the tracks on this disc - reel of film of Alexander Ivanov "Pervorossiyanin" (1967).
At the time of completion of this article, we have learned that the only concert band promises to give 15 February in the Red Revolution - St. Petersburg. As we know, February 15, 1879-year-terrorist Narodnaya Volya Grigory Goldenberg was killed Russian statesman, Major General (1868), the Governor of Grodno (1868-1870) and Kharkiv (1870-1879) provinces, the Governor-General Prince D. N. Kropotkin.

A play on words and concepts, "red", "bread", "Kropotkin" refers to the "Red Wheel," "Hot Bread", "theoretician of anarchism - Kropotkin," a creeping rhizome values signifiers, causing dizziness, and at the same time the pleasure of overcoming inhibitions .
https://vk.com/event86901210 - a reference to the event and ...
I think the governor is still alive ...
на 08:39