Stas Baretsky was born in the town of Lomonosov. Have graduated from College majoring driver. He worked as a security guard at a local food market on schedule every two days. In the early 1990-ies worked at the cemetery, opened a cafe "White horse", closed at the time of default, then a small grocery store that is also closed. 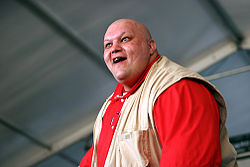 Began writing poetry at the age of 14, only in 2002 decided to record on the basis of their songs. In the period from 2003 to 2004, he recorded two solo albums released on the label "Trap": "Censorship" and "Censorship-2". Some of the songs got on the radio "Petrograd — Russian Chanson". In 2004, his works were appreciated by the electronic Duo "Christmas Toys", located in the same city. They offered him to record an album and to perform live in clubs. The album "Elektronika" became one of the most exciting musical events of 2005. In addition to concerts with "Christmas decorations" in Moscow and St. Petersburg, Stas included in the concert of the group "Leningrad", wrote the lyrics for the songs "heaven tennis" and "Credit" for the album "Bread". The contractor caught the attention of many journals, however, as he argues, music for him is not a way of earning money, it attracts the very atmosphere of show business, which is hard to refuse.
Works as an administrator at the Agency for funeral services.