The Nihilist Spasm Band is a unique experimental collective generally known as "the first noise band." Formed in 1965 in London, Ontario, the Canadian group has since improvised on a number of instruments, including homemade creations such as the violin created by bandmember Art Pratten, the "Pratt-a-various." Bandmembers include Pratten (who also plays "water-pipe"), Bill Exley (spoken word), Murray Favro (guitar), John Clement (guitar and drums), John Boyle (drums and kazoo), and Hugh McIntyre (bass). Their first concert took place in early 1966 and their debut recording, No Record, followed two years later. Another decade passed before their next album, Vol. 2, was released, but despite their sporadic recording, the band remained busy with live performances. For over 30 years, NSB has performed every Monday night at a gallery in their hometown. They have also performed at N.Y.C.'s Knitting Factory, the FIMAV music festival in Quebec and other creative music festivals, and toured Japan in 1997. Many of the Nihilist Spasm Band albums have been reissued on the Japanese label Alchemy Records by fan and noise artist Jojo Hiroshige (of Hijokaidan). Sonic Youth's Thurston Moore is also counted among NSB's big fans. In March 1998, the band threw the first No Music Festival, featuring improvisers from Japan, Toronto, N.Y.C., Chicago, and more. Box sets of each No Music Festival have been issued on Canada's independent label Entartete Kunst. 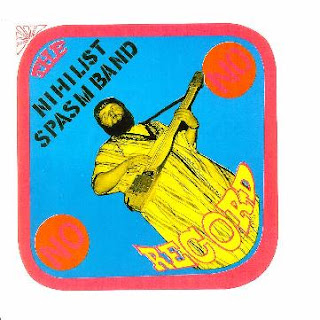